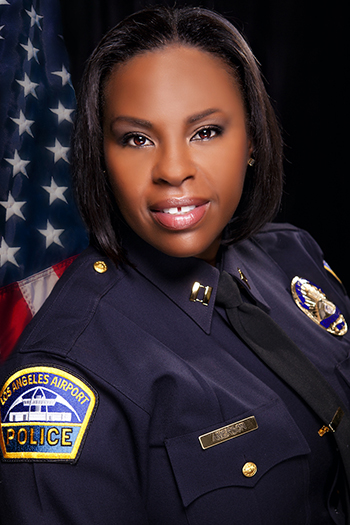 This is the first time in the history of the Los Angeles Airport Police that two out of three LAXPD Assistant Chief positions have been filled from within. Captain Tyrone Stallings was also appointed.

As a Sergeant, Amerson was a contributor to the California Commission on Peace Officers Standards and Training Safety Guidelines. As the Chief’s Adjutant, Amerson partnered with Airfield Operations to re-write and implement the LAX Security and Airfield Enforcement Program (SAFE), a program dedicated to individual and collective accountability by assigning points for driving, safety, and security infractions on LAX’s Airfield Operations Area (AOA).

In 2005, Amerson was promoted to the rank of lieutenant and was assigned as the officer in charge of internal affairs and background investigations. Between 2005 and 2007 Amerson, along with dedicated airport police background investigators was responsible for facilitating the hiring process for over one hundred new airport police recruits, creating the most continuous and substantial growth of the organization.

As the Executive Officer, Amerson collaborated with the Los Angeles Police Department to form the LAX Crime Task Force; bringing together members of the Airport Police and LAPD’s detective teams. This partnership yielded success in the area of crime reduction, stakeholder and community relations.

In 2011, Amerson was promoted to the rank of captain and held assignments as the commanding officer of professional standards – internal affairs, background investigations, training, the firing range and traffic and security. More recently, Amerson commanded the security access control unit. She and her team of highly skilled and dedicated police and security personnel manage and operate vendor and tenant access to the airfield operation area through the physical inspection of tons of cargo destined for departing aircrafts each year.

On December 16, 2020, Amerson was promoted to airport police commander as the first female officer to obtain this newly implemented rank. However, less than a month later on January 2, 2020 Amerson would be announced as one of two emergency appointed Assistant Chiefs by Chief Cecil W. Rhambo. Amerson’s role as an assistant chief is over the agency’s operations section – patrol, traffic and security, and the crime task force. Nearly 1,000 of the 1,200-person agency will report to Amerson.

She is an Adjunct Professor at California State University Dominquez Hills teaching Terrorism and Extremism, and Criminal Justice and the Community. She is the author of the college textbook, “Concepts of Historical and Emerging Terrorism.”

Amerson has been highly engaged in community work since she was in 10th grade and attending Los Angeles Unified School District. After having started an Elementary Drill Team in 6th Grade, Amerson work with her peers in the community was a natural progression. She started a Community-based drill team with her sister and the support of her parents and neighbors. Amerson was a role model for many teens and young children in the community, providing them an alternative to less productive activity.

In 2012, Amerson founded the Latasha Wells Amerson Leadership Institute, Board Room Leadership Academy (www.lwaleadership.com) where she and her team of volunteers provide mentoring and leadership development opportunities to youth throughout Los Angeles County and beyond by hosting several academic, community, life enhancing events and an annual leadership conference. Her most cherished youth event yet has been “Camping with Cops,” that included three days of human interaction, teambuilding, K9, and CSI demonstrations between members of law enforcement and the youth. Approximately 88 percent of the graduating youth in Amerson’s leadership program have matriculated to college.

She is also the founder of Road Chicks Los Angeles, a women’s support and leisure travel organization providing mentoring and self-care opportunities to busy women. Amerson personally mentors several of the youth and adults.

When she is not working, Assistant Chief Amerson enjoys RV-ing and relaxing with her husband Ken, and their three children. She also enjoys traveling and planning family events.