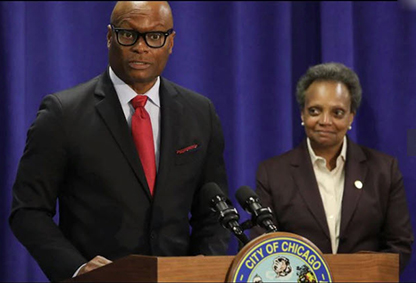 Mayor Lori Lightfoot announced her choice of former Dallas police Chief David Brown as the next Chicago police superintendent Thursday, calling him the “humble leader” the city needs to lead it through its violence problem and the unfolding coronavirus emergency.

The selection of Brown, chosen from among the three finalists for the job named by the Chicago Police Board this week, was a crucial choice for Lightfoot, who picked a permanent top cop for the first time since being elected mayor last year.

At a news conference Thursday making the announcement, Lightfoot said Brown in Dallas made it a mission to bring peace to neighborhoods, and led initiatives on accountability and transparency. Highlighting Brown’s lifelong history of overcoming adversity and track record of reducing crime in that city, Lightfoot declared him the best man for the job here.

“In this time, in this moment, the Chicago Police Department — indeed our city— needs this humble leader,” Lightfoot said. “A man of integrity whose mettle was forged in tragedy,” she said, mentioning his time leading the department through a mass shooting in 2016 that took the lives of several police officers.

“I know well that a person’s true character comes through in crisis,” she said, adding Brown stepped up and showed exceptional leadership. She said when she watched news reports about the shooting four years ago, she couldn’t have imagined the day when she would be mayor of Chicago and choosing him to lead the city’s police force.

As the Dallas police chief, Lightfoot said, Brown implemented community policing initiatives, implicit bias training, published never-before-released data on officer-involved shootings and made his city “the first in the nation to institute departmentwide de-escalation training.”
“All of which helped bring Dallas’s violent crime rate down to 50-year lows,” Lightfoot said.

After he was introduced, Brown thanked Lightfoot and offered his condolences to the family of the first police officer to lose his life to COVID-19, a death the mayor had announced earlier in the day.

He said his call to serve crosses city lines, led him from Dallas to Chicago and drives his career.

He said he was honored to lead police in Chicago. “Chi-Town,” he said. “That Windy City.”

Brown said in fact, Dallas and Chicago have much in common: “strong, proud and tough.” But asked why he would want to take the job in his new city, Brown responded, “Are you kidding me? The city that produced Michelle Obama and elected Mayor Lightfoot? Sign me up for that.”

He did mention the coronavirus pandemic and said it has shown the value of police officers. Brown pledged to help lead the city out of the crisis.

“We will get our communities up and running again,” Brown said.

The 59-year-old Brown is the third Chicago police superintendent chosen from outside the force since 2008. That year, then-Mayor Richard M. Daley picked longtime FBI veteran Jody Weis as his police boss, and Mayor Rahm Emanuel’s first selection was New Yorker Garry McCarthy, who held the job from 2011 until 2015.